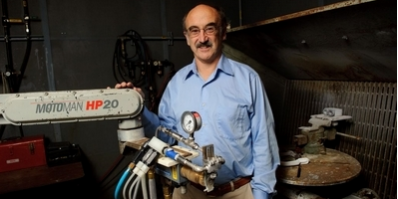 Eric Jordan and Maurice Gell partnered with Storrs-based HiFunda to create Solution Spray Technologies (SST) in order to commercialize research into plasma spray. The company will operate out of the UConn technology incubator in Storrs, run by the Office of the Vice President for Research’s technology transfer arm.

SST’s technologies have several applications, but an obvious move for its commercialization efforts is thermal barriers for gas turbines. The SST application costs less and lets the gas turbines run hotter, which makes them more efficient, Jordan said. The company, in its commercialization efforts, will have access to $2.15 million in funding from the U.S. Department of Energy, which was awarded to HiFunda and UConn.

HiFunda’s president, Balky Nair, will be the CEO of SST, having served as an executive of various companies for the past 15 years. HiFunda also grew out of the UConn technology incubation program.